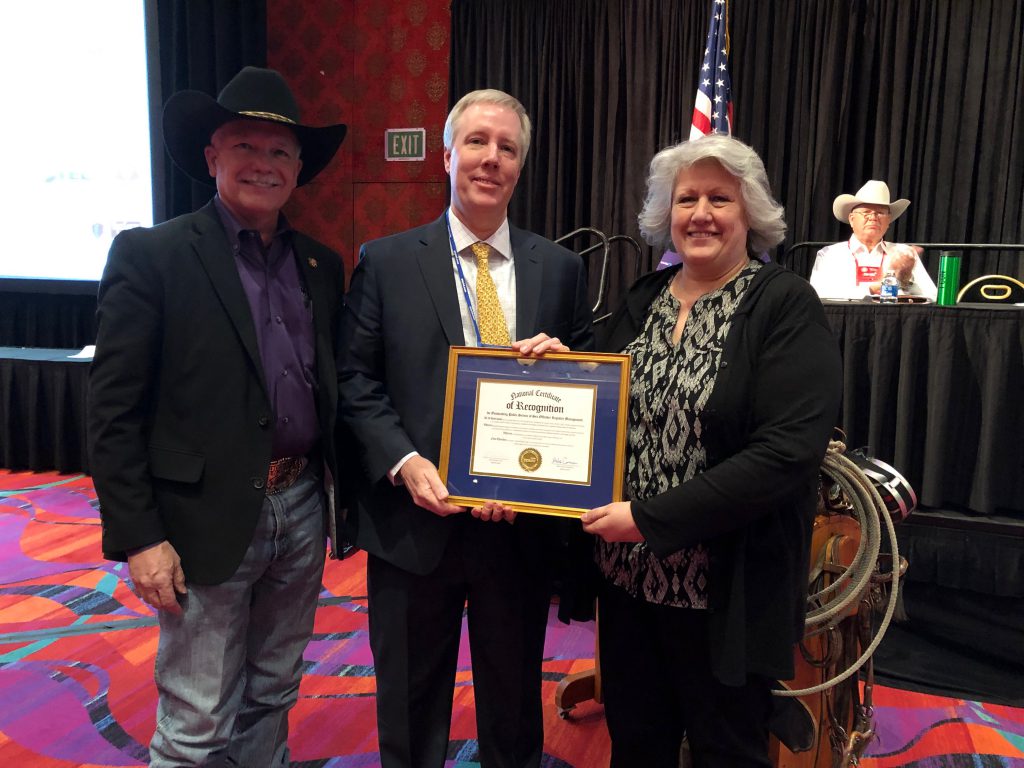 Sheriff Donahue and CCSO employee Debbie McRae receiving the award from Mike Cormaci, President of OffenderWatch. The award was presented during the Western States Sheriffs’ Association conference in Reno, NV in March 2019.

Sheriff Kieran Donahue and the Canyon County Sheriff’s Office (CCSO) has received national recognition for excellence in overseeing the county’s 737 sex offenders. Sheriff Donahue and his office use the software management tool OffenderWatch to keep track of the registered sex offenders, often using the system to aid in investigations and proactively improve public safety. Of the 3,000 agencies and 13,000 users in the OffenderWatch network, Sheriff Donahue was selected to receive a National Certificate of Recognition for Outstanding Public Service of Sex Offender Registry Management for his work in public safety.

“I’m both honored and humbled to receive this national recognition on behalf of the Canyon County Sheriff’s Office,” said Sheriff Donahue.  “I want to especially thank CCSO employee Debbie McRae, who has overseen our sex offender registry for the past 23 years. She does a great job and her efforts have brought great recognition to this office.”

“Sheriff Donahue’s superior work is a model for how other law enforcement agents should manage their sex offender registries—going above and beyond to ensure the public is safe,” said Mike Cormaci, president of OffenderWatch. “The public wins when law enforcement leaders understand how to best use the tools at their disposal to improve safety and communication.”

There are more than 900,000 registered sex offenders in the United States. Most states have a different system for tracking these offenders, making it difficult for law enforcement agencies to keep records when the offenders cross state lines. The OffenderWatch Network is the largest sex offender registry system in the U.S., working with more than 3,000 local, state and federal law enforcement agencies in 37 states, including the Canyon County Sheriff’s Office.