Oregon man sentenced to prison for Aggravated Battery, Grand Theft, and Unlawful Possession of a Firearm

Bryan Taylor, Canyon County Prosecutor, announced that Gregory J. Escobedo, age 29, of Oregon, was sentenced on October 11, 2022, by the Honorable Randall S. Grove for felony Aggravated Battery with a Firearm enhancement, felony Unlawful Possession of a Firearm by a Convicted Felon, and felony Grand Theft. Escobedo was also charged with a Persistent Violator enhancement on all three felony charges. 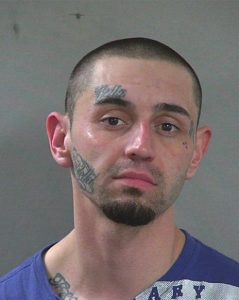 Escobedo was arrested in March 2021 after Canyon County Sheriff’s Deputies responded to the area of Old Hwy 30 and Farmway Rd in an attempt to locate a vehicle that had been stolen from a gas station in Payette County. As deputies began arriving in the area, they observed the stolen vehicle near Old Hwy 30 and Willis Rd. After a brief pursuit, the vehicle yielded to deputies and Escobedo was taken into custody without incident.

Further investigation revealed that Escobedo had shot and injured the owner of the stolen vehicle he was driving when he was arrested. According to police, the victim observed his vehicle being stolen from a Payette County location near I-84 milepost 13. The victim obtained a ride from another party and they followed the stolen pickup into Canyon County. The pickup stopped and the victim confronted Escobedo, at which point Escobedo shot him. Deputies later located a pistol inside the stolen vehicle.

The March 2021 shooting and theft occurred approximately 5 months after Escobedo was released from an Oregon prison after serving six years following a manslaughter conviction for killing his father.

“There is no doubt in mind that our community as a whole is safer knowing that the defendant will be in prison for a long time,” said Prosecutor Bryan Taylor. “He is the epitome of a career criminal who has no regard for the people he hurts or damage he causes. I’m thankful he’ll be behind bars for the foreseeable future.”

Escobedo will next be transported to Oregon to face additional charges related to other carjackings in Federal Court.